From my library: In defense of John Gurche 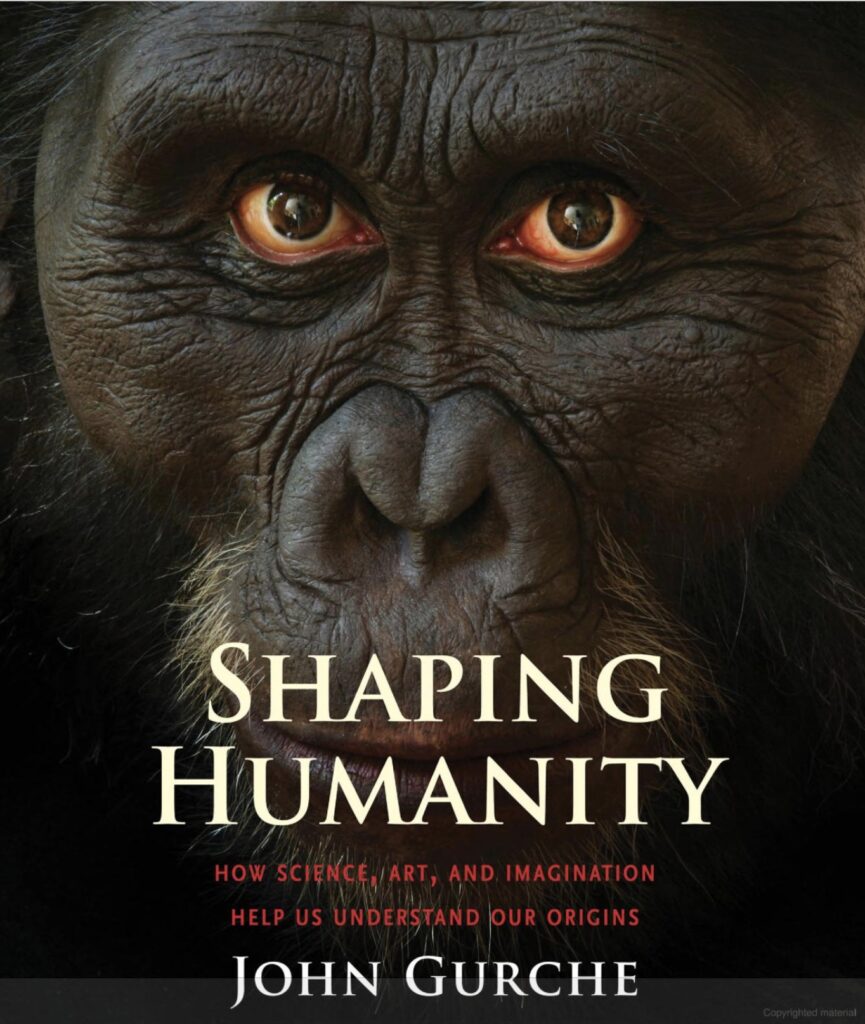 I recently came across an article in “Frontiers in Ecology and Evolution” by Ryan Campbell and others entitled “Visual Depictions of Our Evolutionary Past: A Broad Case Study Concerning the Need for Quantitative Methods of Soft Tissue Reconstruction and Art-Science Collaborations.” The article is about the need for artists to use more rigorous methods when they recreate creatures of the past, particularly extinct species of humans.

This article piqued my interest because, as the Art Director of National Geographic, I was involved in many such projects, which are called reconstructions. For these projects, artists literally reconstructed prehistoric creatures, starting with fossil bones. In a step-by-step process, they then put on muscle, skin, and finally, hair or feathers to produce a lifelike appearance.

Artists that do this professionally are called paleoartists. They are the ones who bring us images of dinosaurs, woolly mammoths, and Neanderthals. A favorite book in my library is written by one of the most accomplished paleoartists, John Gurche. It is called “Shaping Humanity: How Science, Art, and Imagination Help Us Understand Our Origins.” The book is a lavishly illustrated summary of his life-long experience studying prehistoric humans and figuring out what they looked like. It is full of drawings and photographs of his sculptures, as well as “behind-the-scenes” stories behind his projects. He even mentions me and once or twice!

The authors of the “Frontiers” article were critical of the work paleoartists like Gurche had done, particularly for museums, saying that reconstructions of the same prehistoric human species were inconsistent from museum to museum and they did not accurately reflect what scientists know or do not know. They said, “very little effort has been made to produce reconstructions that are substantiated by strong empirical science.”

They have apparently never met or talked to John Gurche.

I worked with Gurche many times during my career at National Geographic Magazine. I got to know him personally. He is completely dedicated to basing his reconstructions on whatever empirical data is available to him. He is one of few artists who went to the trouble to collect his own data from primate dissections.

The “Frontiers” article authors went on to say that they “hypothesized” that the reason paleoartists did not do better work was that they were subject to “immense pressure from museums to produce exhibits that are exciting” and that this got “in the way of any efforts to present reconstructions that are based on actual scientific knowledge.”

I don’t think their hypothesis holds up. The paleoartists I know are as dedicated to science and accuracy as the scientists I know. And they would not compromise their accuracy despite pressure from any source, including their clients. I suggest that the problem is more related to the fact that these reconstructions are often created under the pressure of deadlines and with limited information. These are not open-ended research projects. This artwork is how paleoartists make a living.

I once commissioned John Gurche to reconstruct Homo floresiensis for the cover of National Geographic. National Geographic wanted to publish their article at the same time, more or less, as the scientific paper announcing the discovery. This meant Gurche had one month to do what normally takes him at least four. That’s deadline pressure.

Gurche also had to work with limited information. The skull of Homo floresiensis had been damaged and some features, such as the nasal bones, were missing. The authors of the “Frontiers” article are critical of reconstructions based on incomplete data. What was Gurche to do? Leave a hole in the face? That would have looked pretty weird on the cover of National Geographic. Instead, he did the next best thing and made an educated guess based on his experience and what researchers proposed as the phylogenetic ancestry of H. floresiensis. He put a Homo erectus-like nose on his sculpture. Gurche did not have the luxury of waiting until more data about the nose of H. floresiensis was discovered. If he had, he would still be waiting.

Gurche’s version of Homo floresiensis was terrific, and as far as I know, it has not been shown to be wrong. In fact, paleoartist Elizabeth Dayne’s version, created years later, seems quite similar. The most noticeable difference between the reconstructions is the skin color, and that is a good example of the sort of data that is missing when it comes to prehistoric humans.

The authors of the “Frontiers” article suggest that it is a disservice when paleoartists aren’t clear with their audience about what data is available for reconstruction and what is not. I would argue that there is no disservice to humanity or science going on here. Gurche and Daynes completed their commissions with the best available information. They cannot control the context that their work appears in because the work is commissioned by other entities, such as National Geographic or the Smithsonian. And whether those contexts made it clear what science knows about prehistoric species or not, the world has still been enriched and many children inspired, rather than disserviced, by the reconstructions paleo artists make.

In his book, Gurche says that if and when anything more is known about the nose of Homo floresiensis, he may have to adjust his reconstruction of it. This is further evidence that paleoartists are committed to “getting it right.” I don’t know any paleoartist who would not want to do the same for the sake of accuracy.

The authors of the “Frontiers” article seem not to appreciate how difficult it is for paleoartists to get data about prehistoric human fossils from the researchers who discovered them and study them. Many paleoanthropologists are jealous of their data and are not particularly willing to share it with other researchers, not to mention artists. This makes it very difficult for media or museums to share new science with the public.

Several projects I worked on at National Geographic were thwarted by this problem. I remember, for example, how impossible it was to get information for reconstructing the likenesses of Sahelanthropus tchadensis or Ardipithecus ramidus. The discovery of these two prehistoric humans had recently been announced, but researchers refused to give access to data that would be helpful for a reconstruction. In one case, information only became available to artists after 25 years!

I understand the motivation of researchers to control how their research is being portrayed to the public. But it is unfair to blame artists for working with incomplete data when that is all that is available to them. Think of all the dinosaurs that have been reconstructed by paleoartists from incomplete skeletons.

The wind blows both ways.

Artists who help us envision the past by accurately reconstructing prehistoric life play an important role in society. Their creations bring to life the research of scientists who are working to understand the history of life on this planet. Our own evolutionary history is a key part of that, especially now that our species is the dominant one on the planet. One look at Gurche’s book underscores how much he has contributed to that understanding. The better we understand our past, the better we can meet the challenges facing the future.

Rather than slapping paleoartists on the wrist for less than perfect or inconsistent reconstructions of prehistoric humans, I suggest that researchers lead the way toward more and better collaborations with artists. The authors of the “Frontiers” article point to new methods and technologies that promise to make reconstructions more accurate and better informed in the future. Let’s find a way to make sure that this new information gets into the hands of artists in a timely way and that researchers with data are paired with artists who are willing and able to help visualize their research for the public.

To do this, researchers need to be more aware of how artists and artistic commissions work, as well as the timing of news cycles and the concept-to-fabrication schedules of museums. In turn, perhaps paleoartists and the venues which present their work in different contexts could make more of an effort to clarify what part of their reconstructions are based on data and what parts are not. A more collaborative spirit between researchers, artists, and venues that communicate science to the public could result in greatly improved science communication, not only in the field of prehistory but in many branches of science.