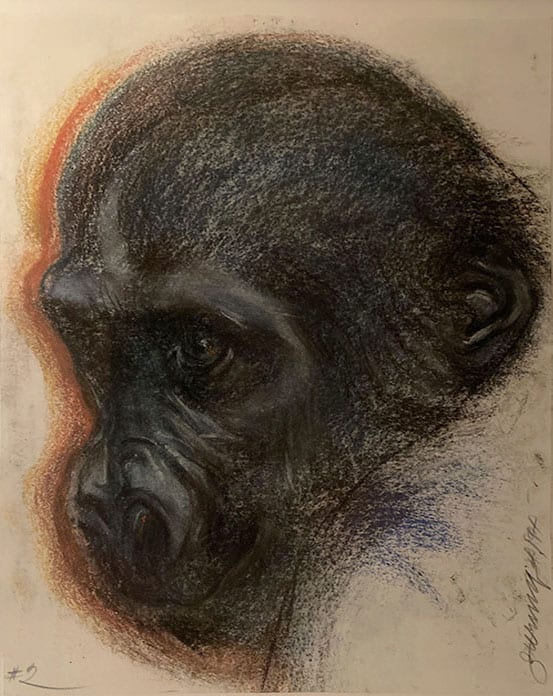 I met Bob Ziering when I was art directing a publication that used a lot of freelance conceptual illustrations. That was a long time ago and I do not remember the art he created for the magazine. But I do remember his gorillas.

I met Bob in New York City after he finished his assignment. He showed me his gorillas. At first, I found it sort of strange that a freelance illustrator like Bob would spend so much time on art that was not commissioned. Then I realized that the real Bob Ziering wasn’t the guy I hired to do artwork for the magazine. The real Bob Ziering was the guy who was passionate about gorillas.

Before many artists were even aware there was a mass extinction crisis brewing, Bob picked up on the messages coming out of Africa from pioneer wildlife researchers like Dian Fossey. Gorillas were in deep trouble. He began to study gorillas intensely and created image after image of thoughtful and expressive gorilla portraits. Some included human babies to emphasize our connection to other great apes. Many of his gorillas appeared in a solo exhibition titled “Twilight of the Gorillas.”

When I was setting out to write this blog post on the extinction crisis I was not thinking of Bob. It was when I was doing an internet search for examples of artists who were raising awareness of the crisis that Bob’s artwork popped up. It was then I realized that Bob was exactly the kind of artist I was hoping to write about in my post. Here was an artist who was passionate about wildlife and extraordinarily concerned about its well-being. Bob saw the intimate connection between our welfare, as custodians of the planet, and that of wildlife. Our fates are intertwined.

This sort of perspective is what I call the Art for Our Sake perspective. We are living in times when the world is facing so many urgent problems that we do not have time for Art for Art’s Sake. Art needs to work harder, like Bob Ziering’s art does, to raise awareness of problems and even point the way toward solutions.

I’ve always liked Bob’s energetic and colorful style. I bought one of his gorilla drawings and have had it hanging in my living room for decades. It shows a young gorilla apparently in contemplation. That stare is what I like about it. It as almost as if we can feel the gorilla thinking. I don’t imagine it is about anything good.

I was not conscious of the influence Bob Ziering had on me until I refreshed my memory of Ziering’s work. It was quite a shock to me since I thought my work was so original.

This has to do with his influence on my extinction series, which I started last year. Two of the oil paintings happen to be gorillas. I painted an orangutan as well. Like the Ziering gorilla in my living room, all of the animals I painted, from frogs to bongos, look their audience in the eye. In many of my paintings, you can even see the reflection of the viewer in the animal’s pupil.

What struck me was his gorilla images where multiple gorilla faces or bodies are shown, blended in such a way that it amplifies the connection the gorillas seem to be seeking. I did not remember that Bob used that device in his work. I used it quite a lot in my art and I thought I came up with it on my own! But I’ll concede now that Ziering’s powerful images must have penetrated my brain and stayed stored there, unconsciously influencing my art until now.

I have no problem giving Bob credit for having originated an artistic approach I used. I now see him as an unconscious inspiration not only for the aesthetic approach to my extinction series but for me as an art-for-our-sake activist.

Bob is now entering his 90s. How many times during his career did he think about how much more could be done if more artists were speaking out through their work like he was? Was he the proverbial voice in the wilderness? Perhaps. But today, even though gorillas are still in trouble, people are now much more awareness of their plight thanks to Bob and others.

The only problem is that this is not just about gorillas. There are over 41,000 other species that are currently endangered. About 700 of them are mammals. It took Bob Ziering decades to bring the world’s attention to the gorillas. How many artists and artworks will it take to bring attention to—and hopefully save—the others?